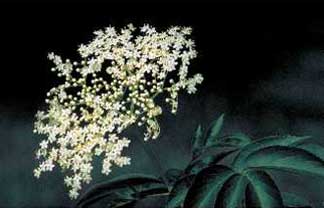 The blue elderberry tree, Sambucus nigra L. ssp. cerulea (Raf.) R. Bolli (formerly Sambucus mexicana), provided the Indians of Southern California with many useful products. Known to the Serrano as kuut, to the Cahuilla as hunqwat, and to the Luiseño as kutpat, the elderberry grows as a shrub or a tree that can reach a height of more than 20 feet. Blue elderberry is common along stream banks and open places in riparian areas. From its blue-black berries, pale yellow flowers, and bright green leaves to its branches and stems, the elderberry provided food, medicine, musical instruments, and a dye used in basketry.

Food was provided by the berries, which were gathered in the summer months and eaten fresh, made into jam, and also dried for later use. For medicinal use the dried elderberry flowers, kuut ashur awaki in Serrano, were used to brew a tea which was said by Martha Chacon to be especially good for children who had fevers. Not surprisingly, the yellow-green tea is very high in Vitamin C content. Another medicinal use she related was to take the leaves and crush them to make a poultice to put on sprains and swelling. Dorothy Ramon also noted use of elderberry flowers for medicinal tea, and of the berries for food. In addition, she recalled that her father had planted an elderberry tree near her family home more than eighty years ago so that he would have a convenient and plentiful supply of the fruit.

Katherine Howard mentioned that a whistle could be made from the hollowed stem. In his book, Voices of the Flute, Ernest H. Siva reports that flutes (Serrano, wiirrer’) were made from elderberry by the Serrano, as well as by other area tribes. The four-hole flute was made from a piece of elder about 1.5 inches in diameter and 2 feet long, with the soft pith removed and the mouthpiece on the end. Flutes were decorated with incised and painted designs.

According to information published in 1980 by Travis Hudson and Thomas Blackburn in the fourth volume of their monumental 5-volume work, The Material Culture of the Chumash Interaction Sphere, not only the Chumash but also the Gabrielino, Kitanemuk, and other neighboring groups in Southern California used elderberry wood to make several other musical instruments. Among these were the bullroarer, a long slat that was twirled on the end of a long cord to make a low humming sound. Others were the split-stick clapper used to accompany the rattle during dances, and the musical bow or harp.

Yet another use of the elderberry was to make a black dye for basketry materials. Gerald Smith and Ruth Simpson reported in 1964 that if a black color was desired, coiled Juncus splints were “soaked in a solution containing elderberries and stems,” echoing an earlier mention in 1900 by David Prescott Barrows. In her 1924 article on the Serrano, Ruth Benedict noted that prepared sumac (Rhus trilobata) fibers also were dyed in this manner, being left in the solution for a month. The black elderberry dye, known as tcupiatium, produced a design material that was “much more highly prized by the Serrano themselves than the various brown shades of Juncus which are extensively used in baskets intended for sale,” according to Benedict, who recorded information told to her by Rosa Morongo.